YPG-dominated milita infiltrates Raqqa's old city, coalition says
Orient Net
US-led International Coalition said early Tuesday (July 4) that the so-called Syria Democratic Forces (SDF) were able to infiltrate the old neighborhoods of Raqqa, northeast of Syria, after cover by coalition airstrikes.
"The portions targeted were 25-meter sections and will help preserve the remainder of the overall 2,500-meter wall," the coalition said in a statement.
Kurdish media reported YPG-dominated SDF militia entered the neighborhoods of Hisham Abdulmalik, south of Raqqa and Yarmouk district, west of the city, after battles with ISIS.
On the other hand, ISIS terrorists launched an attack on the positions of PKK-affiliated militants in the neighborhood of Rumaila, north of Raqqa, restoring the control of the cemetery and seizing an armored vehicle, ammunition and medium weapons, according to SMART Agency. 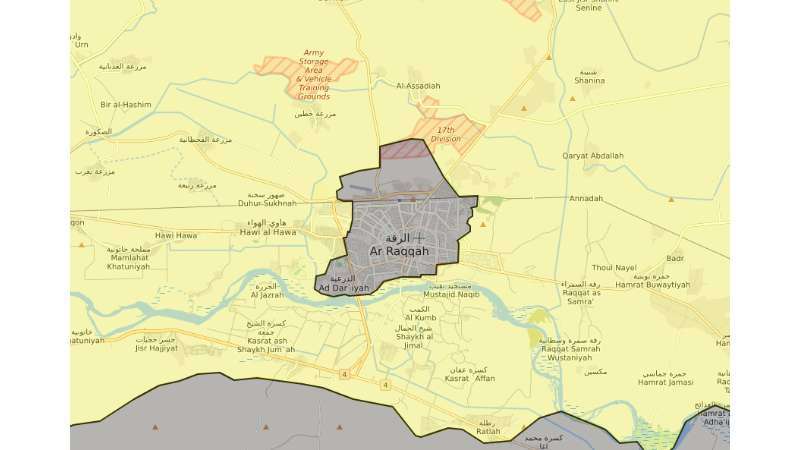 These developments come two days after the YPG militia sent new military reinforcements to the western and eastern sides of Raqqa city, which included 1000 mercenaries trained in camps under the auspices of the US-led International Coalition, as ISIS terrorists withdrew from al-Tala’y camp, south of the city.
YPG-dominated SDF militia launched on June 7 a battle for the capture of Raqqa under the pretext of expelling ISIS as part of a military campaign called the Wrath of the Euphrates.
However, since the start of the YPG’s fight against ISIS, more than 300,000 civilians from Raqqa were forcibly displaced from their homes, according to statistics of the International Alliance.
A number of Arab tribes in Raqqa province accused the YPG militia of forcibly displacing Arabs in Tal Abyad under the pretext of fighting ISIS.
The United Nations has accused the YPG-dominated Kurdish militia of committing abuses and human rights violations in the areas it has captured in Raqqa, such as Tabqa city, including looting, abduction, arbitrary detention and recruitment of children.
The United Nations High Commissioner for Human Rights, Zeid Ra'ad al-Hussein, stressed the need "not to sacrifice the lives of civilians to achieve rapid military victories," calling for the observance of international law and take all feasible preventive measures.
He confirmed that more than 173 civilians have been killed since early June as a result of aerial and ground bombardment on the city of Raqqa, noting that more than 100,000 civilians are trapped in the city of Raqqa amidst the fighting.