Orient Net
The PKK- affiliated Syria Democratic Forces (SDF) is preventing thousands of Arab locals of Raqqa western countryside from returning to their homes, a war monitor reported.
The Syrian Network for Human Rights Network (SNHR) – a UK-based war monitor – confirmed that the YPG-dominated SDF militia is preventing around 4,000 locals from returning to their homes in al-Salhabiya al-Sharqiya village in Raqqa western countryside.
SNHR said in a report issued on Friday (July 7) that nearly 4,000 Syrian Arabs are trapped in the fields around al-Salhabiya al-Sharqiya, in rural areas, under dire humanitarian conditions.
“They live in primitive tents without food, aid, drinking water or sanitation,” the report said.
The human rights group accused SDF of practicing forced displacement, which is considered a war crime, calling upon the supporting countries to pressure them and end their forced displacement of Arab locals.
SNHR report revealed that 7 people were injured by the direct Kurdish targeting of a demonstration organized by the people of the village on June 23. The protesters condemned the forced displacement they were subjected to and demanded to return to their homes. 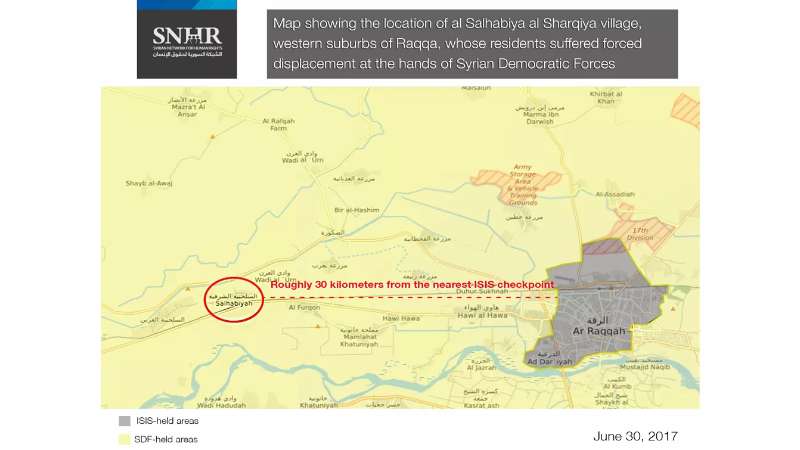 The human rights network called on the SDF militia to allow the people to return to their homes immediately, to end their suffering and to provide immediate and urgent food and medical assistance.
The SDF militia had occupied al-Salhabiya al-Sharqiya in May under the pretext of expelling ISIS terrorists. The SDF indiscriminate  shelling on the civilian-populated village forced tens of thousands of its locals to flee. Most of them were forced to remain in desert areas that were not equipped for humans.
The YPG-dominated SDF militia launched on June 7 a battle to occupy Raqqa under the pretext of expelling ISIS as part of a military campaign called the Wrath of the Euphrates.