Satellite images indicate S-300 not yet operational in Syria AP Photo/Ivan Sekretarev, File
Orient Net
Satellite imagery of S-300 air defense batteries in Syria appears to show that the advanced systems provided to the Assad regime by Russia are not yet operational, an Israeli satellite imaging company said.
Images taken over Masyaf, an area in northwest Syria where numerous purported Israeli strikes have occurred against strategic targets, show that the missile launchers are not yet erected, ImageSat International said.
In addition several elements such as radar remain covered with camouflage nets.
“It is probable that the new Syrian S-300 deployment isn’t yet operational,” according to the company, which interprets visual intelligence.
It was not clear what the status of other batteries deployed in the country was.
Russia delivered the advanced S-300 anti-aircraft batteries to Assad regime last month following the downing of a Russian military plane by Assad air defenses during an Israeli strike on Iranian targets in Syria the month before.
In addition to four interceptor missile launchers, Moscow also provided Assad regime with new radars, targeting systems and command centers.
The Assad military earlier this month said the S-300 air defense systems would largely stop Israel from successfully conducting strikes against targets in the country.
Israel has carried out hundreds of airstrikes in Syria against Iran-linked targets in recent years and has accused Tehran — which like Moscow supports the Assad regime in the seven-year war — of seeking to entrench itself militarily in the country.
Based on Times of Israel 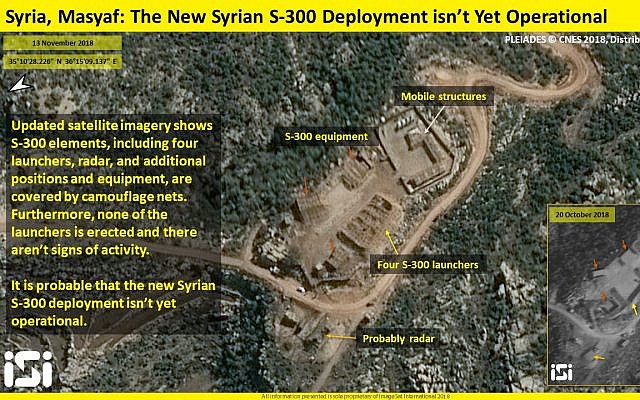