World leaders meeting in Brussels from 12-14 March must make the detention issue the number one priority on their agenda.
We have the right to know what's happened to the missing and who among them is still alive.
My name is Mariam al-Hallak. I once had three sons, now I only have two.
The story of what happened to my youngest, Ayham, is why I co-founded the Caesar Families Association and why I am now calling on all the decision-makers at the Brussels III Conference to pressure the Assad regime to free Syria's detainees.
My son Ayham is no longer alive, but I couldn't bury him. I couldn't say goodbye to the young and ambitious man that he was.
When the Syrian uprising began, he was studying for a master's degree in dentistry.
Like many young people, he joined the peaceful protests against the Assad regime, for which he was first arrested on 16 February 2012. Three months later, he was back with us, but our happiness at his release was to be short-lived.
On 5 November 2012, regime officials arrested Ayham again at Damascus University where he was completing his studies.
They tortured him right then and there, inside the administration room of the department of human medicine, which members of the Syria Students' Union had turned into a detention centre.
Once they were done, Ayham went into a coma, and then they sent him to a military intelligence branch 215 in Damascus.
The prison guards refused to bring him any medical care and told Ayham's cellmates to inform them when he passed away.
Three months later, a former detainee who had been imprisoned with Ayham told me what had happened and that he had died five days after his arrest.
Grieving, we held a memorial service for our beloved Ayham only to be told, 10 days later, that he was still alive and still inside the military intelligence branch 215.
I spent close to a year and a half going to the military court in Damascus, the military police, the intelligence branches and the ministry of interior asking if my son was alive or dead, desperately trying to get information about his whereabouts.
No body to bury
I asked everyone I could think of until the military police sent me to the Tishreen Military Hospital where my search ended. Officials there gave me a death certificate saying Ayham died on 11 November 2012, confirming the date I was initially told.
My journey wasn't over. How could it be when I had no body to bury?
For another six months, I pursued Assad regime officials, humiliating myself as I begged to know where my son's body was. At the end of my search, I was given a document saying the number attached to Ayham's death was 320.
After receiving this document, evidence the regime had killed my son, I was banned from re-entering the military court.
In mid-2014, I left Syria for the last time and headed for a new life.
The Caesar photos had been published by then - a trove of images of tortured and murdered detainees smuggled out by a military defector that revealed the true horror of the regime's detention.
I had tried dozens of times to search the archive for Ayham's face but I couldn't bear looking at all those dead and mutilated bodies.
I didn't see my son but someone else, a survivor of detention who had been with Ayham, found his picture. He showed me the photo and I knew it was him.
Caesar's photos - of 11,000 murdered detainees- are the most significant evidence of the regime's mass torture and executions in its detention centres. These photos include the period between March 2011 and August 2013 in two intelligence branches.
Imagine what we don't know, imagine the true scale of this horror across Syria's 27 intelligence branches and its secret prisons.
We need to pressure countries represented at the Brussels conference, and foreign actors present in Syria, including Russia, Iranian regime and Hezbollah, to leave and stop trying to shape our country to suit their own agendas.
And, as talk of reconstruction murmurs around European parliaments, we need a commitment by lawmakers that any funds will go to international and humanitarian organisations, not to the criminal regime that should be brought before courts and not given a single euro.
Any reconstruction now would be above the mass graves and detention centres which are all over Damascus. In Damascus, you might be walking in the street and underneath you, there might be detainees who are held in detention centres underground.
Sometimes it's hard to not give way to anger and despair. But when we look at other examples of injustice around the world and how long it took victims to achieve legal redress we refuse to give up hope.
We are the families of Syria's missing, tortured and murdered and we demand justice.
Mariam al-Hallak is a Syrian now living in Germany as a refugee, and is co-founder of the Caesar Families Association (CFA)
By MARIAM AL-HALLAK
Link to the original source of Euobserver 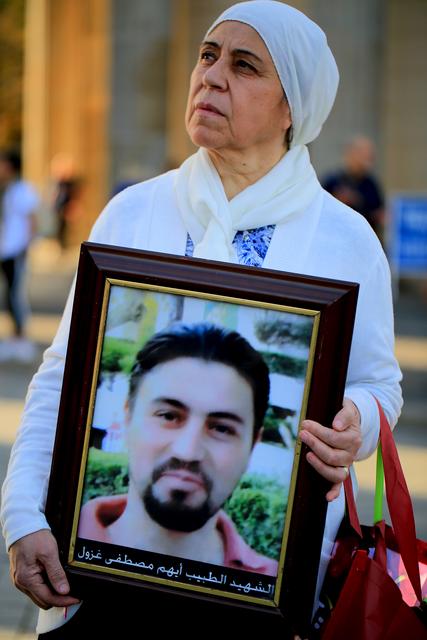