Satellite photo of a site hit in an Israeli airstrike on Iranian sites in Syria on July 1, 2019. (ImageSat International)
Orient Net
A private Israeli intelligence firm on Monday (July 1) identified one of the sites in Syria targeted in an alleged Israeli airstrike earlier in the day as a hangar likely storing advanced weaponry or other military equipment.
In the predawn hours of Monday morning, Assad regime accused Israel of conducting a series of air- and sea-based attacks on military facilities throughout the country, killing at least 15 people, including six civilians.
Israel did not comment on the attack — one of the most extensive series of strikes in several months, coming less than a week after a trilateral summit with Russia and the United States concerning Tehran’s activities and military presence in the region.
ImageSat International, a satellite imagery analysis firm, released a photograph of one of the targets: a hangar located at the Syrian Scientific Studies and Research Center (SSRC) in Jamraya, outside Damascus.
A photograph of the same site from June 4 showed a 12-meter (39-foot) by 30-meter (98-foot) hangar in Jamraya, which lies approximately 10 kilometers (seven miles) northwest of Damascus. The image from Monday showed the structure completely destroyed.
According to ImageSat, the building was “probably used for storage of advanced weapon systems or another sensitive element.”
Hezbollah and Iranian regime’s Islamic Revolutionary Guard Corp (IRGC) have been said to maintain a presence at the Jamraya facility.
The US has repeatedly imposed sanctions on the SSRC for its alleged role in chemical weapons production. France has also imposed sanctions on the agency.
Israeli airstrikes reportedly hit the facility in May 2013 and again in February 2018.
There was no response from the Israel Defense Forces, which rarely comments on reported strikes.
The Israeli military has acknowledged carrying out hundreds of airstrikes in Syria in recent years, on targets linked to Iran, which is backing Assad regime in the Syrian war.
Yossi Cohen, the head of the Mossad intelligence service, said Monday that Israel “can’t agree to Syria becoming a staging ground for Iranian forces or forces operated by it against us. We can’t agree to Syria becoming a logistics base for transferring weapons to Hezbollah and Lebanon.”
Cohen did not refer specifically to the Monday strikes, but acknowledged that Israel conducted military activities in Syria.
“Israel has taken action in the past four years, overtly and covertly, about which only a small amount has been published, in order to block the entrenchment and the production lines of precision-guided munitions,” he said.
The reported strikes came just hours after an Israeli satellite imagery analysis company said Assad regime’s entire S-300 air defense system appeared to be operational, indicating a greater threat to Israel’s ability to conduct airstrikes against Iranian and pro-Iranian militias in the country. 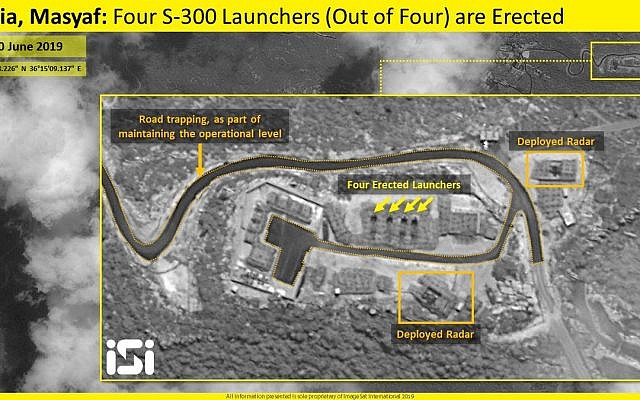 Satellite photo released by ImageSat International show all four missile launchers of the S-300 air defense system in the raised position in Masyaf on June 30, 2019. (ImageSat International)
Until now, only three of the Syria’s four surface-to-air missile launchers had been seen fully set up at the Masyaf base in northwestern Syria.
Israel has threatened to destroy the S-300 system if it is used against its fighter jets, regardless of the potential blowback from Russia.
Edited according to Orient Net
Link to the original source of the Times of Israel