AFP Photo
Orient Net
Protests resumed overnight in Baghdad’s Sadr City district, with at least one member of the security forces killed, although much of the country appeared quieter than it has been for a week as politicians sought a way to end a nationwide uprising.
Iraq’s military said on Tuesday (October 8) one member of an Interior Ministry force was killed and four wounded when they came under fire from unknown assailants in Sadr City, where 15 people died the previous night in riots.
More than 110 Iraqis have died and 6,000 have been wounded in the past week as protesters calling for the removal of the government and an end to corruption have clashed with the security forces, mainly in Baghdad and the south.
The spread of the violence to Sadr City this week could escalate the security challenge posed by the protests. Unrest has historically been hard to put down in the district, where around a third of Baghdad’s 8 million people live with little electricity or water and few jobs.
Protesters gathered there after nightfall, including the families of slain protesters, local police sources told Reuters.
They set fire to tires outside the municipal council building and courthouse in Mudhaffar Square, police said. Police said the gunfire that targeted the security forces was fired from a crowd of protesters. 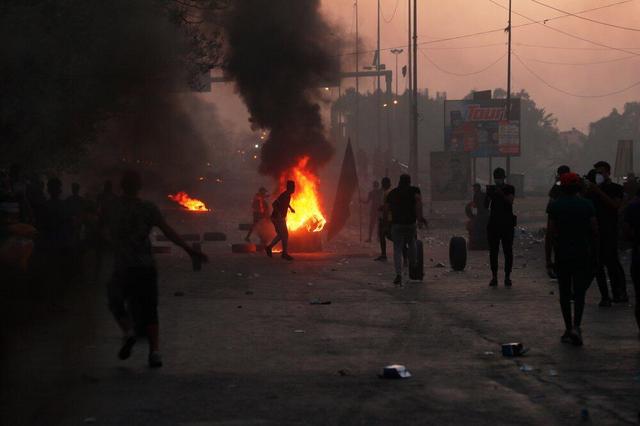 Protesters say they have come under attack by members of the security forces using live ammunition throughout the week. Reuters journalists have witnessed protesters being killed and wounded by snipers firing from rooftops into crowds.
Iraqis are not simply calling for the downfall of a leader or political party. Instead, they are calling for the end of a political system which has existed since the US-led invasion toppled Saddam Hussein in 2003.
Based on Reuters