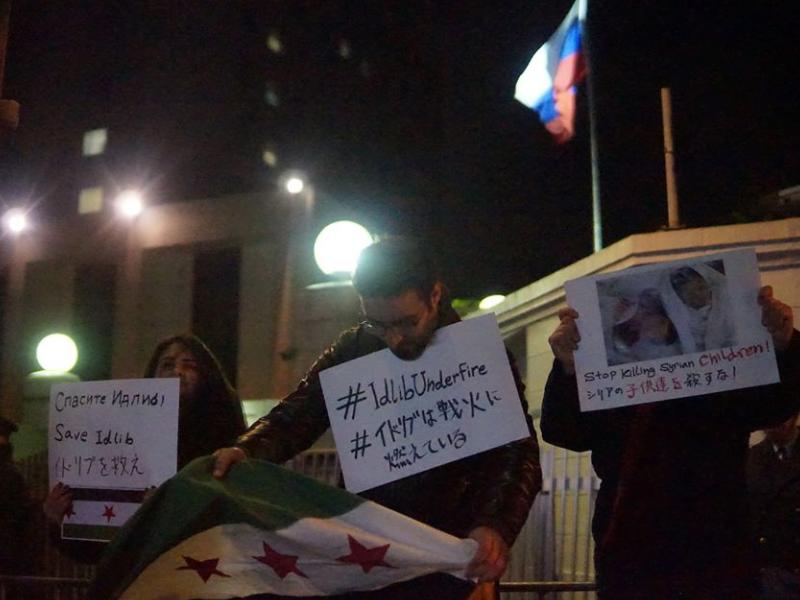 The demonstrators expressed their sympathy and support to the forcibly displaced persons in Syria.
They also song the songs of Abdul Baset al-Sarout, the Syrian revolution’s goalkeepers.
Similar sit-in was reported in Fatih neighborhood in the Turkish capital Istanbul.
Meanwhile, a Japanese NGO released its emergency statement to condemn the Assad regime and its allies which is endangering 3 million lives and calls for an immediate cease of all these atrocities.
Stand with Syria Japan (SSJ) after careful consideration and discussion called upon the UN and the international community for limited military intervention.
“As Idlib burns, our response is vital now more than ever. Let us do whatever we can do to save lives in Syria,” SSJ said.
“We are praying for tens of thousands of Syrians who are struck in terror and starvation under freezing weather and the bombardments at this very moment, the statement added.
Last weekend, Thousands of Syrian demonstrators and activists worldwide took to the streets in more than 50 cities near Russian consulates, protesting Putin and Assad crimes in Syria.
Assad-Russian warplanes have committed dozens of massacres in Idlib and Hama countryside since they launched their bombing campaign on the 30th of April, largely violating the de-escalation zone deal reached between Russia and Turkey.