Syrian man Abdul-Hamid Alyousef, 29, carries his twin babies who were killed during the chemical weapons attack in Khan Sheikhoun, in the northern province of Idlib, Syria, April 4, 2017. AP
Orient Net
Syrians and activists worldwide marked on social media the third anniversary of the chemical massacre committed by the Assad regime in Khan Sheikhoun town.
Last year, civilians and activists gathered on Thursday (April 4) at the site of the massacre in Khan Sheikhoun town.
Children raised placards which read: “Save childhood,” and “Stop the crimes of the Russians, and the Assad regime.” 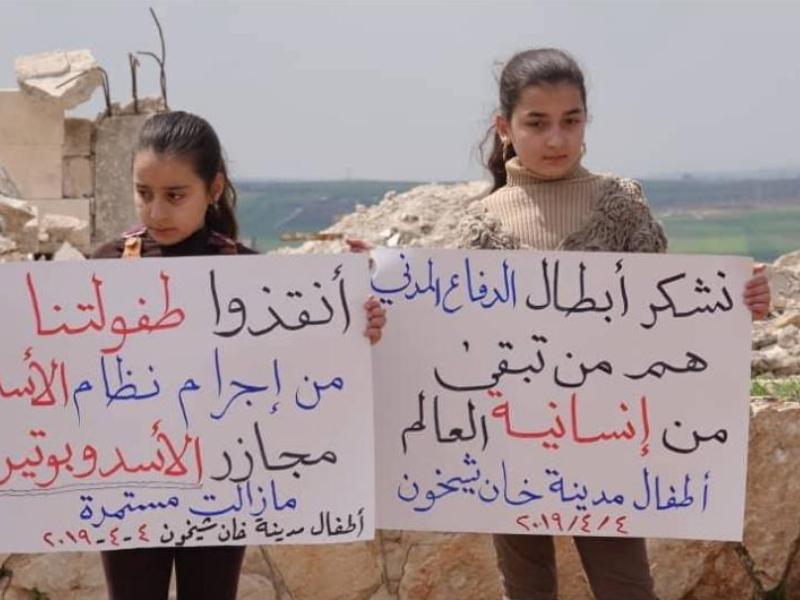 Investigative journalism website Bellingcat, with the help of research group Forensic Architecture, seeks to put an end to the theories that the harrowing chemical attack against civilians in April 2017 was a “false-flag operation.”
A chemical airstrike on the town of Khan Sheikhoun in Idlib, Syria on April 4, 2017, killed over 80 people and injured hundreds. The attack, which dropped a bomb filled with the deadly nerve agent Sarin onto civilians, went down in history as the deadliest chemical assault in the Syrian war since the Ghouta chemical attack in 2013.
It 2017, there was a deadly chemical attack on the town of Khan Sheikhoun in Idlib, four years after the US had declared that such an attack would be its "red line". I reported on Abdulhamid al-Youssef, a father who lost infant twins. The pictures of him holding their limp, pale bodies to his chest as he sobbed stayed with me for a long time. They apparently also stirred Donald Trump, the US President, who ordered punitive strikes on regime targets and told the world that such a thing would never be allowed to happen again, Josie Ensor wrote in the Telegraph
The Assad regime carried out 156 chemical attacks from the date of the attack on the two Ghoutas in Damascus countryside on August 21, 2013, up until the Eqerbat attack in Hama countryside on December 12, 2016, a further 13 chemical attacks between the date of the Eqerbat attack and the Khan Sheikhoun attack in Idlib countryside on April 4, 2017, another 14 chemical attacks between the Khan Sheikhoun attack in Idlib suburbs on April 4, 2017, and the Douma city attack in Damascus countryside governorate on April 7, 2018, and one chemical attack since the Douma city attack, which was the al Kbaina attack in the eastern suburbs of Latakia in May 19, 2019, according to the Syrian Network for Human Rights (SNHR).